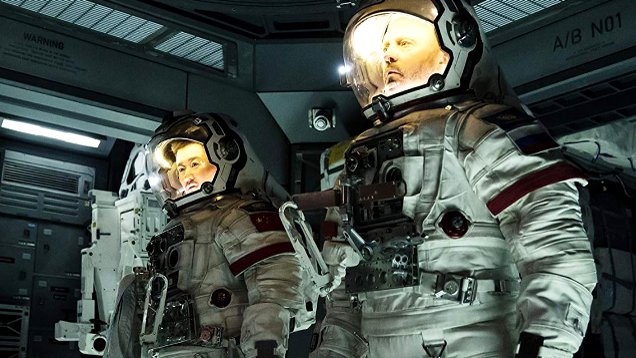 “Go big or go home” seems to be the ethos driving The Wandering Earth, a big budget adaptation of Chinese science fiction author Liu Cixin’s  novel of the same name – and in this case home is a star several light years away from us, it’s going to take us two and a half thousand years to get there, and we’re taking our entire planet with us, because our own sun is going nova. Oh, and it might all be for naught because we’re going to crash into Jupiter.

How’s that for high concept? Narratively and stylistically the film owes something to Michael Bay’s Armageddon, if Armageddon had been made with style, verve, and sheer audacity. Not to mention hope: The Wandering Earth posits a future where, faced with certain extinction, humanity comes together to form a world government, builds thousands of 11 kilometre tall fusion engines all over one side of the Earth, and sets course for another solar system, retreating into vast, sealed underground cities to withstand the lethal cold of space that will envelope the planet during our generations-long exodus. A massive undertaking that requires global cooperation and no finish line in sight? It’s not hard to see a parable – and call to action – for climate change there.

It’s not as easy as all that, of course – sacrifices must be made, like the half of the world’s population that couldn’t be housed in the bunker cities. Among them was the mother of protagonist Liu Qi (Qu Chuxiao), whose terminal illness made her invalid. Now a rebellious teen, Qi resents his astronaut father Liu Peiqiang (Wu Jing) for making that call – and also because he hasn’t seen him in 17 years, as Peiqiang is part of the crew of a space station that acts as Spaceship Earth’s navigator. Imagine a tugboat towing an aircraft carrier and you’ve got a fair idea of the set up.

Young Qi bucks against doing his duty to the collective, preferring to tool around in a spacesuit on Earth’s frozen surface and sulk, but his feckless feelings quickly take a backseat when a navigational error threatens to plunge Earth smack bang into Jupiter’s Red Spot, and Qi, his sister Han Dao (Zhao Jinmai), and their curmudgeonly-kind grandfather find themselves caught up in a military mission led by Captain Wang Lei (Li Guangjie) to go and kickstart one of the failing giant engines and hopefully save the planet.

Look, it’s a lot to take in. The Wandering Earth hits you with big, beautiful sci-fi ideas and concepts at a furious rate. While the plot, broadly speaking, maps onto any given blockbuster disaster movie, there are a lot of moving parts, and a lot of seemingly ludicrous notions that need to be accepted. Some of them are nigh-unbelievable, but writer Liu Cixin is famed for his scientific accuracy, so when the film tells you that Earth’s atmosphere is being sucked away by Jupiter’s sheer mass, just nod and smile. Odds are, he knows more than you.

Besides, big ideas like that are fun, in an Asimov/Bester/Clarke kind of way, but if that’s not your bag there’s always the “ragtag guys on a mission” story which, all window dressing aside, is the narrative spine of The Wandering Earth. The planet may be hurtling to its doom and astronaut Peiqiang may be having a battle of wills with an intelligent computer on the navigational space station (something that seems to happen any time we get too close to Jupiter, come to think of it), but the bulk of the film is a bunch of mismatched heroes in a high tech RV gunning it through the frozen, blasted landscape and dealing with the usual run of landslides, earthquakes, explosions, heroic sacrifices, and what have you. It’s a blast.

Director Frant Gwo brings a fairly Western, post-Tony-Scott style to the proceedings, employing fast edits, roving cameras, and a dense approach to visual information in order to keep things barreling along at the appropriate velocity. Yet The Wandering Earth is also rather painterly, with the striking vista of Jupiter looming over Earth’s icy surface being a dominant recurring image. That painterly tone is also a result of some of the CGI not being quite photorealistic, at times feeling like the matte paintings employed in the pre-digital era. This doesn’t detract from the film, though; rather it anchors it more solidly in the classic SF genre.

It also helps to give the film a fairly unique texture. To a Western, anglophone viewer (this one, at least) The Wandering Earth just feels different, even when its presenting ideas and concepts that we’ve seen in sci-fi cinema before. The film’s armoured truck and exo-armoured soldiers might have antecedents (Aliens comes immediately to mind), as does its cyberpunkish cities and sterile space station, but here there are design choices being made that arise out of a different cultural context, making the familiar seem fresh. A recent comparison might be Black Panther’s Wakanda – another setting that refracted familiar tropes through a little-used cultural lens.

That extends to some of the film’s thematic meat, which goes out of its way to marry the rugged, maverick individualism required of Western style action heroes with Chinese cultural virtues of duty, humility, self-sacrifice, and loyalty, both to family and society as a whole. The Wandering Earth’s heroes are just the kind of gung-ho go-getters who can go off plan and do what needs to be done when the chips are down – but they’re explicitly doing it out of selfless service to the greater good, which is often a by-product rather than an aim of American heroes’ actions. It’s an interesting bit of ideological interplay.

If there are nits to pick, they’re issues common to this kind of big scale, big cast tentpole film: namely, the characters are, by and large, quickly sketched archetypes, their relationships uncomplicated, and their arcs fairly simple. Given everyone else going on, that might be a feature rather than a bug; conceptually, there’s enough to take on board without tipping in a mixed bag of complex personal issues and storylines.

The Wandering Earth is being marketed solely to the Chinese diaspora in Australia, so if you’re not a member of that community it might take some effort to get in front of a screen for this one. That effort will be well rewarded, though. China’s first major sci-fi film is an absolute winner, and if its indicative of what’s to come, the future looks sweet.